Tales from Andersen: A found poem
Upon the election of Donald Trump to the United States presidency, 2016

All stories must come to an end.
In the last evening of the year, bareheaded
and with naked feet, red and blue from cold,
the toys, offspring to a tin spoon, play
at fighting battles and hosting balls, plunder the tree.

Two carriages roll by dreadfully fast.
The children fall down and form a long trail of fire.
The soldier, in the smartest red and blue uniform imaginable,
falls head foremost, his bayonet fixed between two paving stones.
He does not think it proper to shout when he is in uniform.
The little dancer flutters like a sylph
straight to the fire, to the soldier:
“Do you know where those trees were taken? Did you meet them?”
Her father will beat her if she returns without a farthing.
The soldier sheds tears of tin.

It is terrible lonely here: Paper castle, paper boat
dancing up and down. What waves there are in the gutter,
and what a current! The roast goose hops down from the dish
with a knife and fork in its breast
and then the light goes out.

now and then I feel it,
oldest of lost pauses, as if it had never gone,
pleat in time, box lengthening the foot,
body memory waiting, taut muscle
contesting the floor.
Behind my ears, air insists, extending,
emptying me of self;
I am weightless
in this satin moment before the double turn,
before flight.

Ray, we too are fatherless.
We black out this gaslight bar, this flaccid cigarette.
Summers he drove away – a 1955 Studebaker.
Left in my mother’s tortured grip,
I learned every pathology

that may be found between the pages of a book.
Stake flags upon scullery theaters as you must, darlings,
speed dating at the gun & bait shop.
Seed the empty throne with oyster hulls,
spawn alight within them, shalom.

Here outside someone’s old
bedroom
a kudzu Eden curls close,
hesitating, slow to draw her summer cap
bare crown under a star-stacked sky
for the green for the green
grows
green
grows
ever the same
your father
the fifties
who would know now,
remember?

To hell with Kansas.
Already.Let corn dry on the stalks
dead as salesman.         Laugh
drink blanc over ice
like medieval peasants with Frigidaire
half over your shoes
and stumbling
tell the one about your fatherorwasityouruncl

Whatsit
piece of furniture with its own small story
which is egg-zackly! how tiresome
and nearly always
will not
get
sunlit
dust rising from the upholstery
neglected past
or braids rapt round and round
like a queen’s singing
baked birds      because
you won’t do that
not one word
unless you have to.

Candelabra slant sidewise, an affliction they inherit, balance problem spread through the gene pool at the candlestick factory, where qualities of light mix. Wax drips one way and not the other in every set. The center flame is the first to wink out (find Hebrew word).

All year you work your legs, alone in a crib, high fevers and freezing feet, the taste of sieved pears and liver paste, the pinch of plastic pants, wet red rings crosshatched when she lifts you, upside-down land, stars. Wax collects southeast, past Baltimore. You can pick it off dead with a fingernail or melt it away over a flame but marks fuse with the brass, never fade completely.

She opens a line of Ransom poem for you to finish with a word. She keeps the windows open at night, summer and winter. You suck your toes, warm them with your breath.

Then sometime in your fourth year it becomes clear she is not a reliable witness, your mother, neither to events nor to rights and wrongs. She tells about the girl with a poli-oh’d leg who got all the attention, whose gait she aped, or her sister who socked a nun, matters inherently off-kilter-Irish you must figure out for yourself. The problem is you lack confidence in your figures.

At math you are not so good, they tell you when you start competing for fractions and decimals with some little momzer in your class at public school. Such mishegass runs in the family. Your feet sting, dipped in fires of loss.

No one smacks you for reading, though, not even when you hide the novel in your math book, nor pushes you off the chair for it, nor stands you in the hall for raising your hand with the answer. The other girls and boys march alphabetically to the cafeteria. Their mothers do not work as Dictaphone typists at the university hospital morgue.

Here is the insight that burns off, intolerant of sugar, trails away with the first bite of chocolate. You believe it is language acquisition, the fact that you remember, even though you habitually use the second person accusative case. You believe thought forms around words, bias for the mind to cling to, preserving memories.

People might think musically if such practice had survived iambic selection. Music makes good light for remembering. In fact people do think musically, but not sufficiently.

This last is flickering gratitude for every way you grieve. For your scramble-wit mother, for growing up the only working-class kid who goes to harpsichord concerts and summers in the Poconos she pays for with the layers of Band-Aids at your heels. Skewed and disaffected, privileged and beleaguered, kvetching Irish-Jewish-American-style, that’s your Hanukkah.

Under the hanging tree
one hundred years and nearly dead now
where light catches slivers of vertical swing,
we almost hear the whinny of horses,
almost feel the prickle of sweat
on the backs of our arms, claw at invisible knots
chafing our windpipes.
We sift ancient dirt with our teenage sons
beside us, scraping for arrowheads.
Their careful, carved planes whisper
of a past we cannot quite decipher,
its commonplace crimes.
We are too raw, too credulous to do more than guess
how Natives foraged here and danced before the hunt.
Their painted bodies and the grim
Jim Crow south, its dry tongue,
and marching women stifled
in hand-sewn banners:
these are stories to us. The city’s tall shadows
mirror the land in reverse, her buildings
chasms of imagined lives on the ground,
our survivors’ shame,
found stones in our pockets. 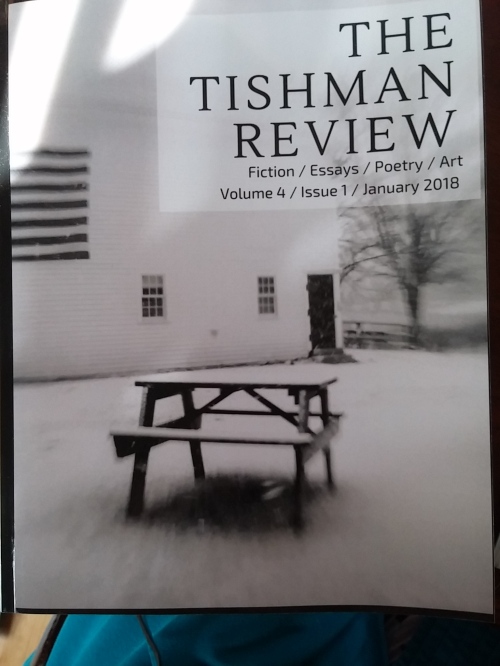 “The moon is no door,” Plath warns us
of madness. First wife in the attic,
under key, whose golem pleasures
will not be reasoned to silence,
frightens God and man.
They deal – brother, uncle, father, lawyer –
trade her to profit all around.
How their masculine shoulders
quake in merriment!
They shake on the dowry,
slap one another on the back,
seal their fate with hers.
Humanity leaps to the tune of that laughter.
She studies fire, hones the murderous urge,
loveless satisfies gravity’s sentence.
No new wife born of bone
to acquiesce can measure
ties that bind evil to dust, can curb man-
kind with a civil tongue.
Lilith in the attic eats barbeque, yet:
sets your barn, your goods, your household stuff,
your crazed children aflame.
For her and for Rochester, born the same,
dust and breath, there is no escape, no past, no door.
All time is present time.
Her lust is consummate.

Barely urban, bored with the house,
its dry settling and tick of mantis wings,
she, little schooled but with much to think of –
what colors must be mixed and cushions sewn
to brighten a dark bedchamber, darker night –
while he snores under the great weight of his belly –

her beloved, lamp of nations, reviews accounts:
pastures, tenants, grains and wools,
payments in cloth, gold sent from the king,
domestics – himself, one wife – she
tallies in silence the bricks of slavery – auditor, architect,
never a choice; in another century she might have faculty,
forum for the mind, a place fit for geometry.

Instead, childless, near forty, she can ponder no further
angles with what means are to hand;
to have this boy, comely and wise in youth,
trace his form with her fingertips, taste his words,
so measured, so few in her mouth;
for him she will tremble; while he, boasting to an audience
of one, himself, taking pleasure in knowledge, not in flesh
of her desire – to fulfill it would end it,
even when she enters nearly naked his counting cell
to deal in pledges, hold his lists to the light,
snatch his veil, he demurs, protests, flees.

Then the mob comes for him.
She holds out his rag in evidence.
Town gossips witness – street trial, cuff and drag –
climax for a story’s end broken too soon.
Idly, now, she may mock him, in conscience force
his aspect if not regard. Dissatisfied with the nothing
that comes next, follow-up to spent passion,
she studies dark triangles

She stands with us in judgment of the law.
Between pumped-in rivers,
shoots of plastic palm, of orchid
buried in shredded cardboard,
green Earth under glass
requiring neither decay nor death
for sustainability,
not sustainable,
desire – endless – determines
help from harm, fair from foul,
ethical particularities.
Before that fatal first bite
she does not understand

what she is ready to do,
can not measure a good God
against a scoundrel.
For it is He still in those days,
He who constructs set-up, no-win,
hardening hearts on purpose,
who plants yearning and defeat
together in the same rut.
We like to think since that long-ago
betrayal, S/He has evolved, like to think
the puzzling name promises,
“I will become,” not that low-rent pledge,
“I’ll be there,”

like a Michael Jackson song.
Not yet concerned with justice,
only obedience, primitive king,
human weakness is foil
to displays of power
and the garden a swindle from the start.
Willing to pluck freedom,
love the binding force,
for so she is made,
not guessing what suffering she might gain
in exchange for choice,
not knowing, quite, what suffering is,
she eats. 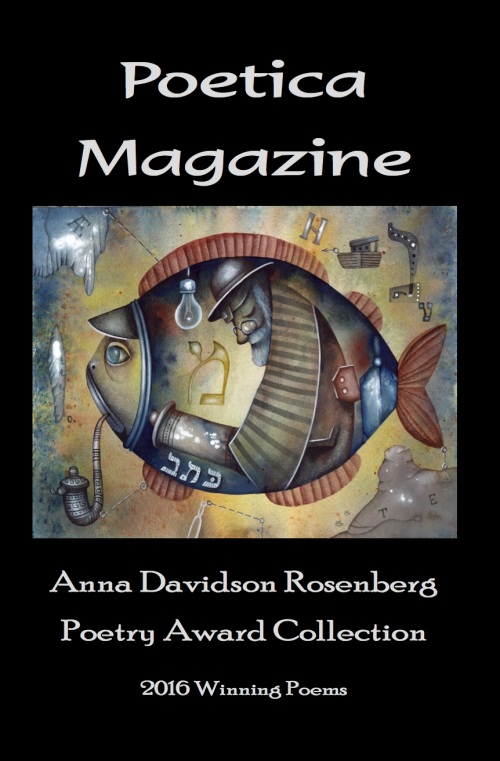 When you enter (Ki tavo)

you see them, living in tents,
their lifetimes’ wages vanished
in a flash of fire. They haul water
from the leaden, asbestos rivers to wash garments,
bathe children and wounds, boil for rice.

Perhaps until now you did not understand chance,
its delicate character. You studied Victorian novels and acne,
holding a mirror to your back.
Decades tumble inward with all their plans and furnishings
you want to say to your young self,
that girl wrapped in reflected light.

Instead, you pass without her noticing
into the displacement camps, into heat-blasted rubble,
into contingencies as they are really lived,
the weight of promise the yoke
that sets you free. 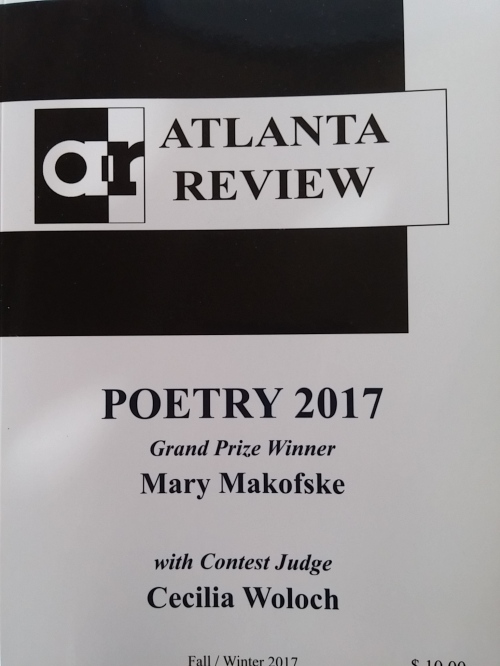 That his seed would become like the stars,
like grains of sand through his son, Isaac,
who cringes still beneath the blade, a means,
he spilled out six sons.
Look, he said, speaking in third person,
come to bed
with your father’s wife, Keturah,
and make your binding as a son,
and raise up seed for your father
in his old age.

It as he who lured me, the patriarch –
acting through a servant –
with bracelets and a nose ring,
with the promise of abundance,
goats and camels.
the promise of flight;
brought me, veiled,
promised me to a weak man, weak as laughter,
forever trusting, forever a tool,
blind to betrayal,
blind to the dark flush of his father’s face;
bought my brother, Laban,
who pats down guests, now, with every embrace,
seeking treasures in the folds of their skin,
gold in their bones,
corrupted by a wedding gift
that came to me –
to be the cutting part.

Now, there is no un-saying what I’ve said,
no un-doing what I’ve done.
My sons are driven,
as their father was driven before them from Beersheba,
one east, the other north.
Their wives are strangers. Strangers.
Alone with the servants and this bleary old man,
who loves too much and will not be consoled,
my father’s generation,
I bend, I fill, I lift, I pour
and long, as ever,
with the longing of a bride
to be away,
to be anywhere else.